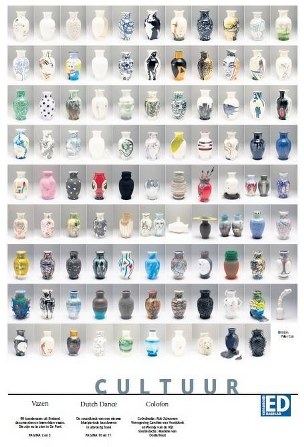 2013, Stilleven – 102 vazen van 99 kunstenaars
Still Life is an exhibition of 102 vases that have been decorated and adapted by ninety-nine different artists from Brabant. The driving force behind this project is Frank van der Linden. It was in 2007 that he first approached an artist with the request to create his own adaptation of a vase provided by him. During the six subsequent years, many other visual artists, designers and architects responded to that same request.
The vases measure forty centimeters in height and are identical in shape. They have been manufactured by the ceramics department of Helmond’s sheltered workshop. There they were cast in molds and, with further treatment in mind, fired only once and thus left unglazed. Their sturdy, robust shape embodies precisely what one imagines a vase to be. What makes each vase unique, and sometimes very surprising, is the individual treatment of the vase by each artist.

For many of the artists, this was the first time that they worked on a vase. The challenge was met from a wide range of artistic standpoints. Aside from ceramic paint, a number of other, often uncommon materials were used. At times the decoration remains limited to the painting of an abstract or figurative motif on the inside or outside of the vase. But the vase might also be transformed into a sculptural object and lose its function as a vase. Coherence and diversity give this colorful collection its charm. The strength of the whole transcends the sum of its parts.